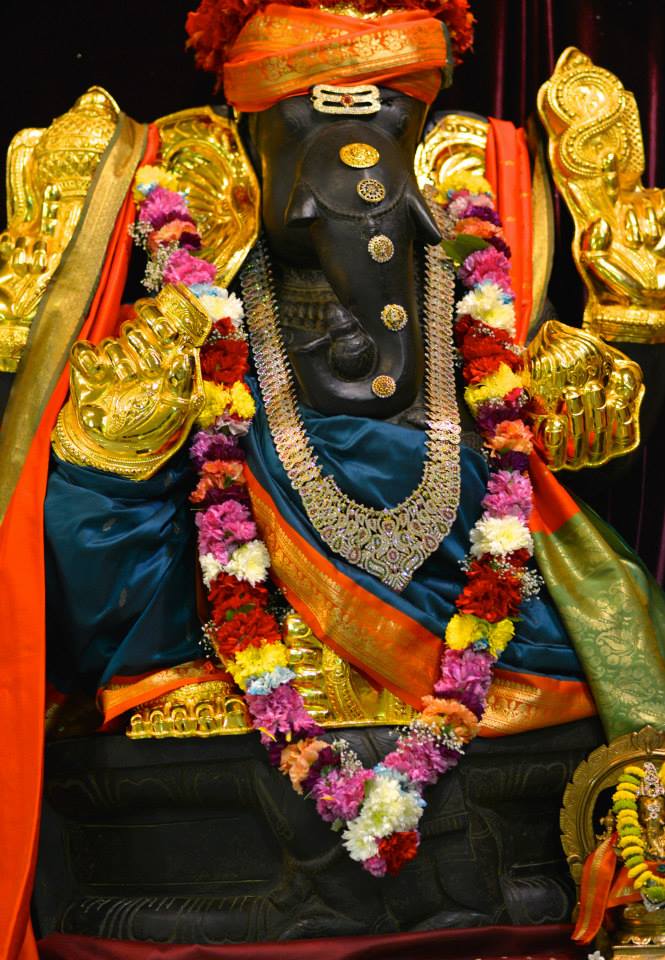 Who is Lord Ganesha?

The legend of Ganesha:

Lord Ganesha is lord of auspicious beginnings. We pray to Ganesha remove all your obstacles in your ventures, whether they are spiritual or material. He is experienced as ‘pure efficiency’, carry this idea and sit before him. You will have his Dharshan! He is known to be the Lord of Muladhara Chakra located at the based of the Spine
Ganesha is the elephant-faced god of Vedic tradition. He is the son of Devi Parvati and Lord Shiva. Once Devi Parvati – the Cosmic Mother – decided to have a personal bodyguard for Her. She made a ball of sandal paste and did the PranaPratishtha – installation of life energy to it. Immediately the ball became a small boy and He was named Ganesha.

Once Lord Ganesha was safeguarding the entrance of the chamber where Devi was taking her bath.At that time Shiva wanted to immediately meet Her. But Ganesha stopped Shiva from entering the chamber. Shiva got angry and immediately chopped the head of Ganesha.

Devi came out and got angry seeing Her son’s head chopped off. She urged Shiva to give back life to Ganesha. Shiva then sent Vishnu – the god of sustenance to find a suitable head for Ganesha. Vishnu gave Enlightenment to a white elephant and released it from its body. He brought the head of that elephant and Shiva – the Mrityunjaya – the conqueror of death,  fixed that elephant’s head on Ganesha’s body and gave life to Him.

Shiva blessed Ganesha that the latter shall be worshipped in the beginning of any new venture for destroying all obstacles and He would be referred to as the God of success.

In the school of Yoga, Muladhara chakra – the energy center in the root of the spine is the seat of Kundalini energy – the extraordinary potential energy in all human beings  through awakening which human beings experience success, mystical powers, leadership qualities, health, and above all Enlightening consciousness. The personification of this Muladhara energy is Lord Ganesha. The Agamas and Tantra shastras explain Lord Ganesha to be the Lord of Muladhara chakra – the seat of Kundalini.

Ganesha has an elephant face with one tusk broken, a huge belly, four hands with pasha, ankusha (a noose and a goad), a bowl of modaka – sweet dish and an abhaya hasta – blessing hand. He has a mouse as his vehicle.

What is the significance of the form of Ganesha?

Last year Swamiji on the day of beginning of GaneshaChaturthiBrahmotsavam unraveled the sacred secrets about Ganesha. The following is the gist of Swamiji’sspeech:

“Ganesha is a powerful form of the Cosmos.The pasha on His left upper hand is the rope that does not allow thoughts to become engram. The ankusha  or the goad on His right upper hand is a small instrument to control a huge elephant. It represents “Unclutching”.Read More….With this ankusha even the thoughts are removed. His upper two arms represent His pure inner space.  When Vyasa wanted Ganesha’s to pen down the great epic Mahabharata that was overflowing through Vyasa, Ganesha did not find anything to use for writing. Immediately He broke one of His tusks and used it for penning down. The broken tusk represents spontaneous decision-making capacity, courage to sacrifice for the cause. The modaka – sweet balls on His left lower hand represent that life will be sweet if the above mentioned qualities are there. His elephant face represents extraordinary awareness and sensitivity (elephant has an extraordinary power of sight and smell). His pot belly represents the whole Cosmos. Indeed He is Cosmic intelligence. The mouse represents playfulness. The cobra on His waist represents He is the source of the Kundalini energy.”

Ganesha Chaturthi Brahmotsavam is the celestial celebrations of the avataric birth day of Lord Ganesha. This day falls every year on the fourth day from the new moon day of the Bhadrapada month of Vedic  lunar calendar which usually falls on August-September months.