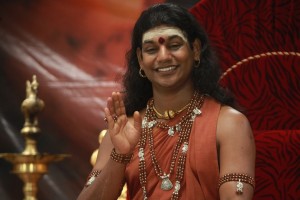 le is a place where the intense cosmic energy is available for everyone to experience. This cosmic energy is embodied and represented by the deities within the temple. Avathara Purusha or incarnations of divine, leave behind these houses of cosmic energy after they leave their physical bodies.

Sri Ramakrishna and 20th century enlightened master beautifully had an answer to the question “If God is everywhere, then why should I come to the Temple?” He said “There is milk all over the cow’s body but can’t get it just poking anywhere.” Though the cosmic energy is available everywhere we are not able to relate with it because it is extremely subtle. For example, consider a solid object. Being made of the element earth it is extremely gross. We can hold it or we can place is somewhere else. We have a lot of control over it but the moment the element transformed to the next level viz. water we are not even able to hold it or handle it. we are forced to something external to hold it. When it goes up to the next level of fire we are not even able to touch it. As the element becomes subtler and subtler our ability to relate and handle is it is becomes harder because we are not so subtle. Cosmic energy is available in the most subtle form. Enlightened Master because of their infinite compassion bring down this energy from it’s most sublte form to the gross level viz/ earth (The level at which we exist and install it in the temple so that we can relate with it and receive all the benefits. 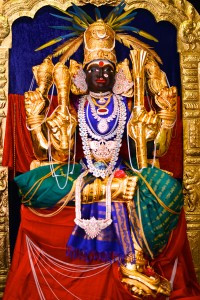 allation of the cosmic energy in a temple is done by brining this energy down the elements. This process is called ‘Prana Pratishtha’. The energy is first brought into the space element by meditation (visualization), into the air element by the mantras (chanting), down to the fire element through the homa (fire offering), down to the water element in the kalasha (water pot), and finally into the murty or deity (the earth element). Due to the energy installed inside the image isn’t a mere idol, it is a deity or murty, a living energy.

These deities are the largest ones in the temple. They are the ones who remain still within the temple and behave as Archavathaa, the living divintiy which decides to be still and bless the archana(worship of devotees).

Utsava in sanskrit means celebration. These deities are grandly decorated and taken around the temple during their particular festive month.

Bhoga also means food in sanskrit. This deity is the deity was we offer food to and awaken and keep to sleep every day and night.